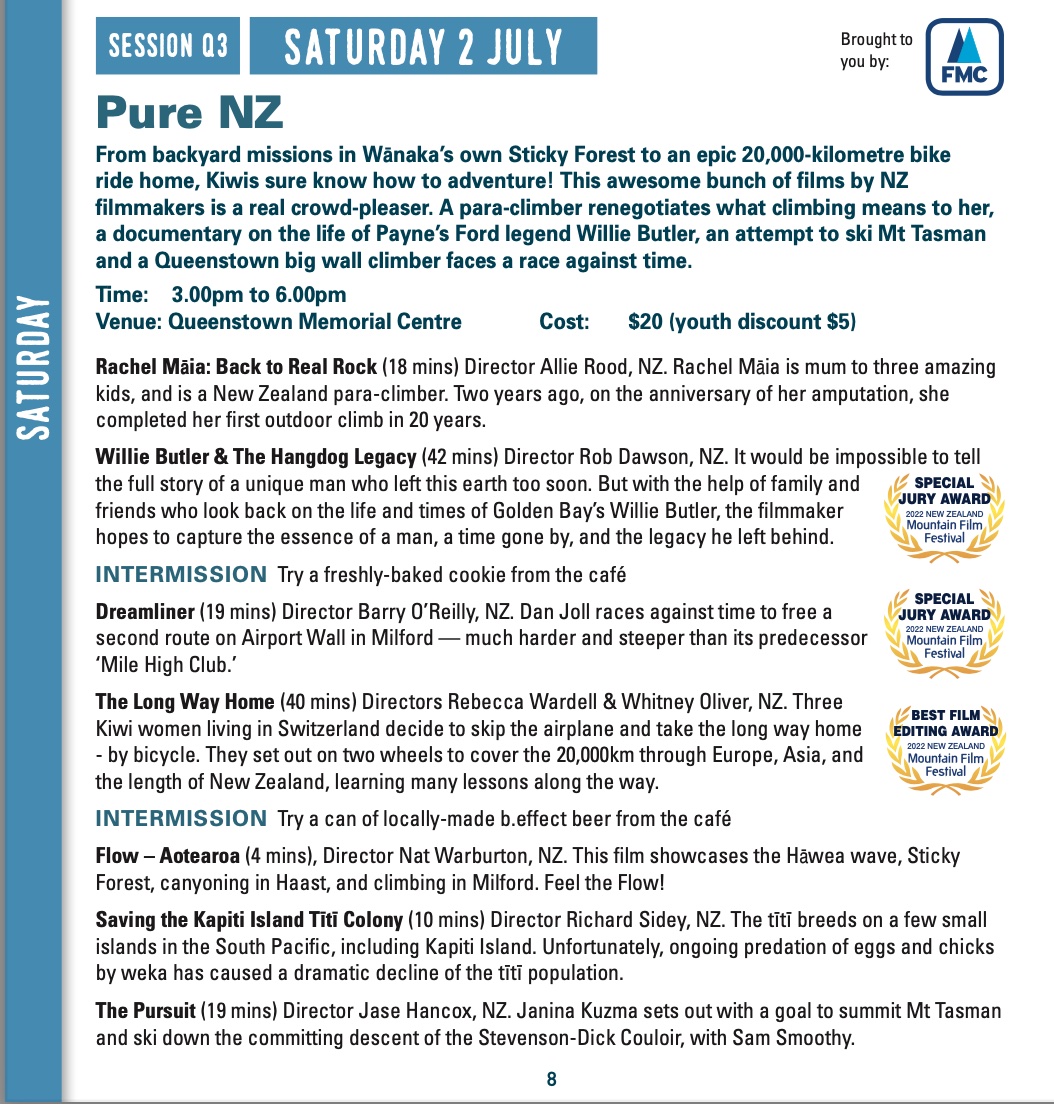 From backyard missions in Wānaka’s own Sticky Forest to an epic 20,000-kilometre bike ride home, Kiwis sure know how to adventure! This awesome bunch of films by NZ filmmakers is a real crowd-pleaser. A para-climber renegotiates what climbing means to her, a documentary on the life of Payne’s Ford legend Willie Butler, an attempt to ski Mt Tasman and a Queenstown big wall climber faces a race against time.

Rachel Māia: Back to Real Rock (18 mins) Director Allie Rood, NZ. Rachel Māia is mum to three amazing kids, and is a New Zealand para-climber. Two years ago, on the anniversary of her amputation, she completed her first outdoor climb in 20 years.

Willie Butler & The Hangdog Legacy (42 mins) Director Rob Dawson, NZ. It would be impossible to tell the full story of a unique man who left this earth too soon. But with the help of family and friends who look back on the life and times of Golden Bay’s Willie Butler, the filmmaker hopes to capture the essence of a man, a time gone by, and the legacy he left behind.

The Long Way Home (40 mins) Directors Rebecca Wardell & Whitney Oliver, NZ. Three Kiwi women living in Switzerland decide to skip the airplane and take the long way home – by bicycle. They set out on two wheels to cover the 20,000km through Europe, Asia, and the length of New Zealand, learning many lessons along the way.

Saving the Kapiti Island Titi Colony (10 mins) Director Richard Sidey, NZ. The tītī breeds on a few small islands in the South Pacific, including Kapiti Island. Unfortunately, ongoing predation of eggs and chicks by weka has caused a dramatic decline of the tītī population.

The Pursuit (19 mins) Director Jase Hancox, NZ. Janina Kuzma sets out with a goal to summit Mt Tasman and ski down the committing descent of the Stevenson-Dick Couloir, with Sam Smoothy.

$20 (youth discount $5)
Buy Ticket Now
Back to All Tickets